Prevention Is Key To Stopping A Fire Accident 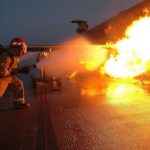 Sadly, there are hundreds and thousandths of residential fires that occur everyday in America from average According to the U.S. Fire Administration, studies show that 50.3 percent of the fires that occurred in the U.S. from the year of 2016 were from cooking, 9.6 percent of fires were caused by heating, 6.6 percent caused from unintentional carelessness and about 6.5 percent were from electrical malfunction. Fires are very unpredictable and can happen to anyone in any household. Most households that have previously experienced a fire have taken a significant loss in their personal property, land and even their entire home. What many homeowners need to realize is that fires are something that can be stopped ahead of time before the fire spreads and gets worse. With the right preventable tools, you are able to stop a fire from breaking out in your home with a quality fire extinguisher. Keeping quality fire extinguishers in all rooms of the home can help to stop a small fire from turning into a large one that can take everything from you.

Based on information from the National Fire Protection Association, the average death rate in America between the years of 2012 to 2016 from a fire-related incident was about 9.7 deaths per 1 million population. Sadly, there have been infants, children, teens, elderly and young adults who have lost their lives in a residential fire. Many of them have been completely caught off guard. When a fire originally breaks out, in the beginning it start off small and easy to put out. However, when you are not able to catch the fire early enough, you end up running into a bad situation that causes you to end up facing significant losses. Some people have lost minor personal belongings and some have lost everything. Staying prepared is one of the best ways that you are able to keep your home safe from a fire accident.

Fortunately, homes are able to keep their homes well-equipped with fire extinguishers to prevent a large fire from breaking out and getting out of control. Many people tend to have a misconception of fire control and think that they can ride their fires with buckets of water and baking soda. In reality, some fires can get so out of control that only a fire extinguisher can safely put it out before it spreads. If you currently are in need for fire prevention resources, then consider connecting with your nearest fire professional services to assist your home in becoming prepared and well-equipped for a fire accident. Take time to conduct a general search for a fire extinguisher tacoma wa.

It is important for households to be aware that prevention is key to stopping a fire accident in your home. But, having the right resources is even more important. You never know when the next fire could hit, so it is best to always be prepared with having fire extinguishers in every room for anyone to easily access. Remember, you don’t want to regret not being prepared for the next fire accident.

Helping to Keep Your Home Secure